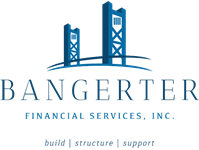 A Brief History of Oil and Gas Investing

In 1859, Edwin Drake drilled what many believe was the first oil well in the U.S. near Titusville, Pennsylvania. Drake could not have imagined how his discovery would create an industry that changed the world. Investment in oil and gas exploration increased over the next forty years, with activity expanding beyond the Appalachian mountains into other areas of the country. Early drillers sought oil to refine into kerosene for lamps, a new lighting technology at the time.

The Dawn of the Petroleum Age

On January 10, 1901, Anthony Lucas, an expert in underground salt dome formations, along with his wildcat drilling partners, reached a depth of 1,139 feet with an exploratory well on Spindletop Hill near Beaumont, Texas. Within moments, as the ground rumbled, the drill pipe blew out of the hole, and a stream of oil 100 ft high gushed 100,000 barrels a day for nine days before the well was brought under control.

What quickly became known as the "Lucas Gusher," the Spindletop well was of a magnitude the world had never seen. The excitement of the discovery combined with Henry Ford's introduction of the gasoline-powered automobile simultaneously spurred an unparalleled level of investment and growth. The modern petroleum age was born.

The Seven Sisters and the Emergence of Independents

By the 1930s, five domestic and two international conglomerates, the “Seven Sisters,” dominated the world oil industry. Though their names changed through mergers and acquisitions over the years, they reigned supreme through the 1970s. (Four behemoths remain today: BP, Shell, Chevron, and Exxon-Mobil.) When the “Seven Sisters” dominated the industry, individual investing was limited largely to the publicly traded stocks of the early conglomerates.

The financial strength of the major oil companies enabled them to focus on exploring larger oil and gas fields in the Gulf of Mexico, Alaska, and throughout the world. This gave room for smaller, independent oil and gas companies to pursue onshore domestic drilling programs, which created the opportunity for individuals to begin investing directly in oil and gas drilling programs.

An Embargo, Industry Collapse and the LP Investment Wave

The '70s and early '80s were not kind to the U.S. oil and gas industry. America endured OPEC's oil embargo in 1973 as Arabs retaliated against the Nixon administration for funding Israel during the Arab-Israeli war. Oil prices soared, and consumers felt the pain.

Higher prices stimulated increased exploration activity by majors and independents, but by the early '80s, this reversed course. A global glut sent oil prices plunging. Hundreds of companies collapsed, and tens of thousands of industry workers lost their jobs.

Ironically, the emerging popularity of the limited partnership (LP) in 1983 fueled a new wave of industry investment. Brokerage firms marketed these programs aggressively to clients as an opportunity to achieve outsized returns along with tax advantages. Money poured in.

True to the industry's 'boom or bust' reputation, the LP investment wave didn't last long. The Tax Reform Act 0f 1986 removed many of the tax shelter and passive loss provisions of these investments, and LPs began to disappear from investors' playbooks. 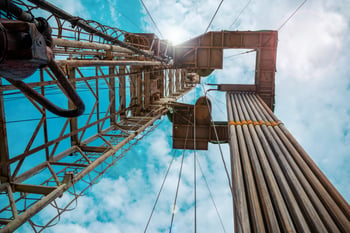 New exploration technologies transformed the oil and gas industry in the '90s. Innovative horizontal drilling techniques enabled the industry to efficiently drill several wells from a single pad. Exploration companies were also able to tap into oil and gas reservoirs at an angle, providing greater access to the pay zone.

Combining the long-established process of hydraulic fracturing with horizontal drilling led to a new age, the “Shale Boom.” Exploration

companies discovered around 2006 that these technologies could transform the profitability of once uneconomic, tight oil and gas formations. Domestic exploration exploded, culminating with the U.S. emerging as the world's leading oil producer by 2017.

With the industry's growth, investors now have multiple ways to participate in the oil and gas industry. Publicly-traded instruments available to investors include:

Each investment option has its advantages and potential drawbacks, so it's important to discuss these opportunities with a knowledgeable investment professional who has years of experience working with DPP sponsors.

If you would like to learn more about oil and gas investment opportunities, download our free guide, Investing in Oil and Gas, What You Need to Know or give us a call at 916.965.1879. 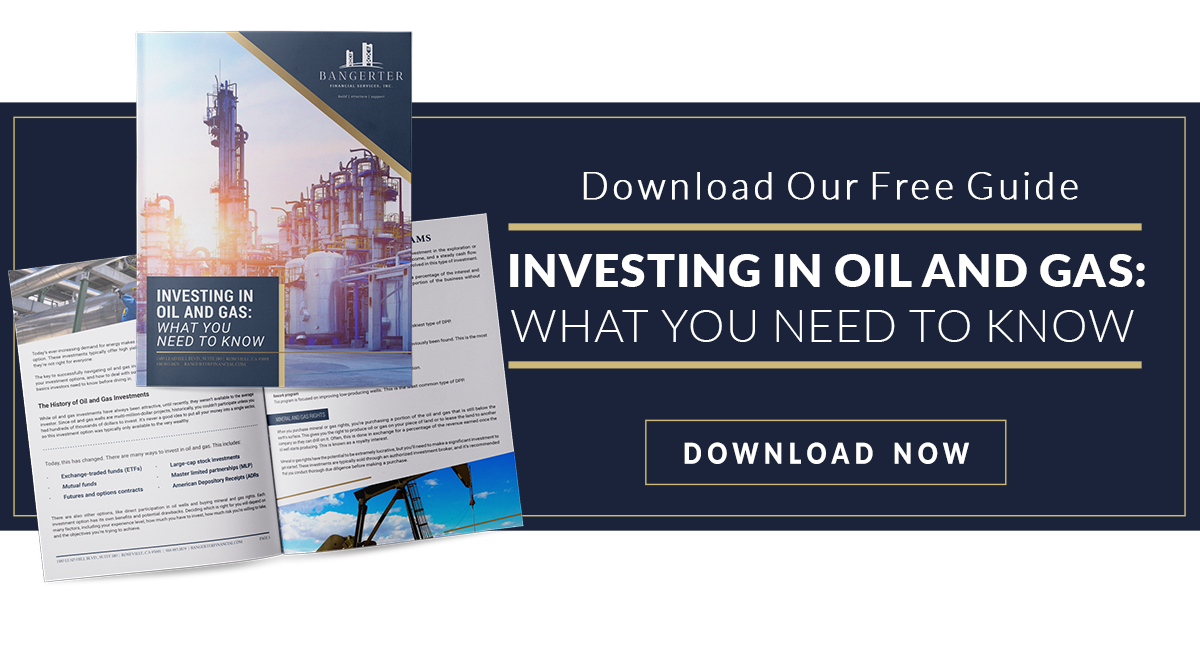 This is for informational purposes only, does not constitute individual investment advice, and should not be relied upon as tax or legal advice. Please consult the appropriate professional regarding your individual circumstance.

Because investor situations and objectives vary, this information is not intended to indicate suitability or a recommendation for any individual investor.

Investments in commodities may have greater volatility than investments in traditional securities, particularly if the instruments involve leverage. The value of commodity-linked derivative instruments may be affected by changes in overall market movements, commodity index volatility, changes in interest rates or factors affecting a particular industry or commodity, such as drought, floods, weather, livestock disease, embargoes, tariffs and international economic, political and regulatory developments. Use of leveraged commodity-linked derivatives creates an opportunity for increased return but, at the same time, creates the possibility for greater loss.

A direct participation program (DPP) is a pooled entity that offers investors access to a business venture's cash flow and tax benefits. Also known as a "direct participation plan," DPPs are non-traded pooled investments in real estate or energy-related ventures over an extended time frame. 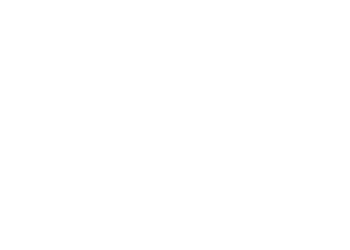 Check the background of your financial professional on FINRA's BrokerCheck.

The content is developed from sources believed to be providing accurate information. The information in this material is not intended as tax or legal advice. Please consult legal or tax professionals for specific information regarding your individual situation.  The opinions expressed and material provided are for general information, and should not be considered a solicitation for the purchase or sale of any security.

This site is published for residents of the United States only. Representatives may only conduct business with residents of the states and jurisdictions in which they are properly registered. Therefore, a response to a request for information may be delayed until appropriate registration is obtained or exemption from registration is determined. Not all of services referenced on this site are available in every state and through every advisor listed. For additional information, please contact us at 916.965.1879.

There are material risks associated with investing in DST properties and real estate securities including liquidity, tenant vacancies, general market conditions and competition, lack of operating history, interest rate risks, the risk of new supply coming to market and softening rental rates, general risks of owning/operating commercial and multifamily properties, short term leases associated with multi-family properties, financing risks, potential adverse tax consequences, general economic risks, development risks, long hold periods, and potential loss of the entire investment principal. Past performance is not a guarantee of future results. Potential cash flow, returns and appreciation are not guaranteed. IRC Section 1031 is a complex tax concept; consult your legal or tax professional regarding the specifics of your particular situation. This is not a solicitation or an offer to sell any securities. DST 1031 properties are only available to accredited investors (typically have a $1 million net worth excluding primary residence or $200,000 income individually/$300,000 jointly of the last three years) and accredited entities only. If you are unsure if you are an accredited investor and/or an accredited entity please verify with your CPA and Attorney.